From an idea … to the foundation

In 2017 Vanja Cirkovic from Eastern Serbia applied at Hohner Conservatory in Trossingen to study in the soloist class of Andreas Nebl. Unfortunately, Eastern Serbia is not an EU member state and therefore a guarantee of 8,500 Euros had to be provided by her for a residence permit and to start studying. But most of the students do not have so much money! And there was no study support program for such situations either, that could have helped!
Andreas Nebl was concerned and spoke to the students from his accordion class to look for solutions. Among the part-time students, Katharina Büeler, Peter Klotz and Nadine Bösing immediately agreed – there MUST be a solution! Collecting money, organizing concerts for donations, obtaining certificates as proof, … many ideas were discussed. And finally they even went looking for sponsors for such student funding! Together they collected the needed money, opened up a bank account, provided evidence and finally Vanja was allowed to come to Germany to study!
But one thing remained – all sponsors expected a donation receipt. It was discussed: setting up a foundation? – in Germany too expensive! Establishing of a non-profit association was finally the idea, because it was clear to everyone that this type of support was completely missing in the field of accordionists and that there will certainly be a need in the future.

But how to found an association?
In our case, during a car trip on a joint venture.
Suggestions for names were discussed, statutes drafted and purposes and aims were set. At the end of the day, FIAE was born and on July 23, 2017 the Establishment-meeting took place in the living room of the Nebl family. Many students and interested people came to get an insight and to find out more. Finally, 13 founding members signed the founding protocol, a board of directors was elected and the founding of the association was registered with the local court. Since then we have been looking forward to a steady increase of members and many new projects that we would like to implement in the future! We look back with pride on the successful projects in the past and it is a matter close to our hearts to keep in touch with all participants.

promoting the accordion in the surroundings of classical music

building and maintaining a network of students, professors and supporters (sponsors, benefactors) across national borders with the aim of musical exchange on international level 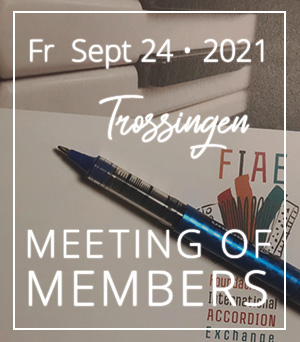